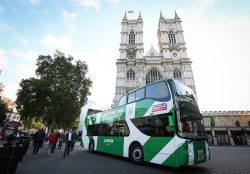 11th October 2018, London – Early-rising tourists were given a sightseeing surprise this morning when The Original Tour unveiled London’s first ever 100% electric hop-on hop-off open-top bus outside Westminster Abbey, offering city-trippers a carbon-free carbon copy of the firm’s famous tours in a move welcomed by London’s Deputy Mayor for Environment and Energy.

Green in colour and concept, the 12-metre double-decker was revealed in front of the iconic London landmark before taking its first passengers across Parliament Square on a tour of the capital’s standout attractions. From Saturday 13th October it will run on The Original Tour’s Yellow route, taking in sights and scenery from St Paul’s to The Shard and Shakespeare’s Globe to the Gherkin.

London’s Deputy Mayor for Environment and Energy, Shirley Rodrigues, was at the launch which represents the first step in bringing zero-emission sightseeing to the capital. It comes as The Mayor of London, Sadiq Khan, is implementing bold measures to reduce London’s air pollution, including the world’s first Ultra Low Emission Zone (ULEZ) which will start in central London on 8th April 2019, some 17 months earlier than planned.

London’s Deputy Mayor for Environment and Energy, Shirley Rodrigues, said: “To help tackle the air pollution health crisis in London we have taken bold action to ‘green’ the bus fleet and cut toxic vehicle emissions, and it is fantastic that we now have the UK’s first fully electric sightseeing bus on the capital’s streets. With six months to go until the introduction of the Ultra Low Emission Zone in central London, electric vehicles are growing in popularity, and people are more aware than ever of the harmful pollution older buses and vehicles can emit. I want to congratulate The Original Tour on the first of many brilliant green sightseeing buses.”

The Original Tour is credited with pioneering the now familiar hop-on hop-off sightseeing concept. Founded in 1951 during The Festival of Britain it invited passengers to tour ‘around the town for half a crown’. Today it is the only London bus tour to be awarded Trip Advisor’s Travellers Choice Award.

The Original Tour is a subsidiary of RATP Dev, the international arm of RATP Group, one of the world’s leading public transportation companies. RATP Dev worked with four industrial groups in Europe – UNVI, Ziehl Abegg, BMZ and SAF – to design this first ever double-decker, open-top electric vehicle which was also launched in Paris in April 2018.

Ronan Bois, sightseeing business unit director at RATP Dev, said: “Every day people rely on us to discover the best of the most iconic cities around the world and we’re investing in innovation for a new generation of sightseers. We’re proud to be the first sightseeing network to introduce a 100% electric bus in London, showing our commitment to our customers, the city and the community.”

The new silent-running vehicle, wrapped in a unique green edition of the brand’s Union Jack livery, has a range of 150km – the equivalent of six loops of The Original Tour’s Yellow route. It will carry up to 75 passengers at a time, seven days a week, and on an average day will make 125 stops on a single charge. It will be charged overnight at the operator’s Grade II listed Wandsworth depot; it takes 4.5 hours to fully charge the battery, after which the bus can run for up to 11.5 hours.

Jane Lewis, Managing Director of The Original Tour, added: “We’ve always been daringly original, creating memories that last a lifetime for people from all over the world. Today they are increasingly eco-conscious and we’re responding to exactly that. The Original Tour has been bringing the capital’s iconic sights to life for longer than anyone else but today we can point to a landmark of our own. This new 100% electric hop-on hop-off open-top sightseeing bus represents the future not only for our brand but for sightseeing here in London.”

As part of its fleet renewal programme, The Original Tour will be gradually converting its buses to zero-emissions vehicles, with three more electric buses planned throughout 2019.